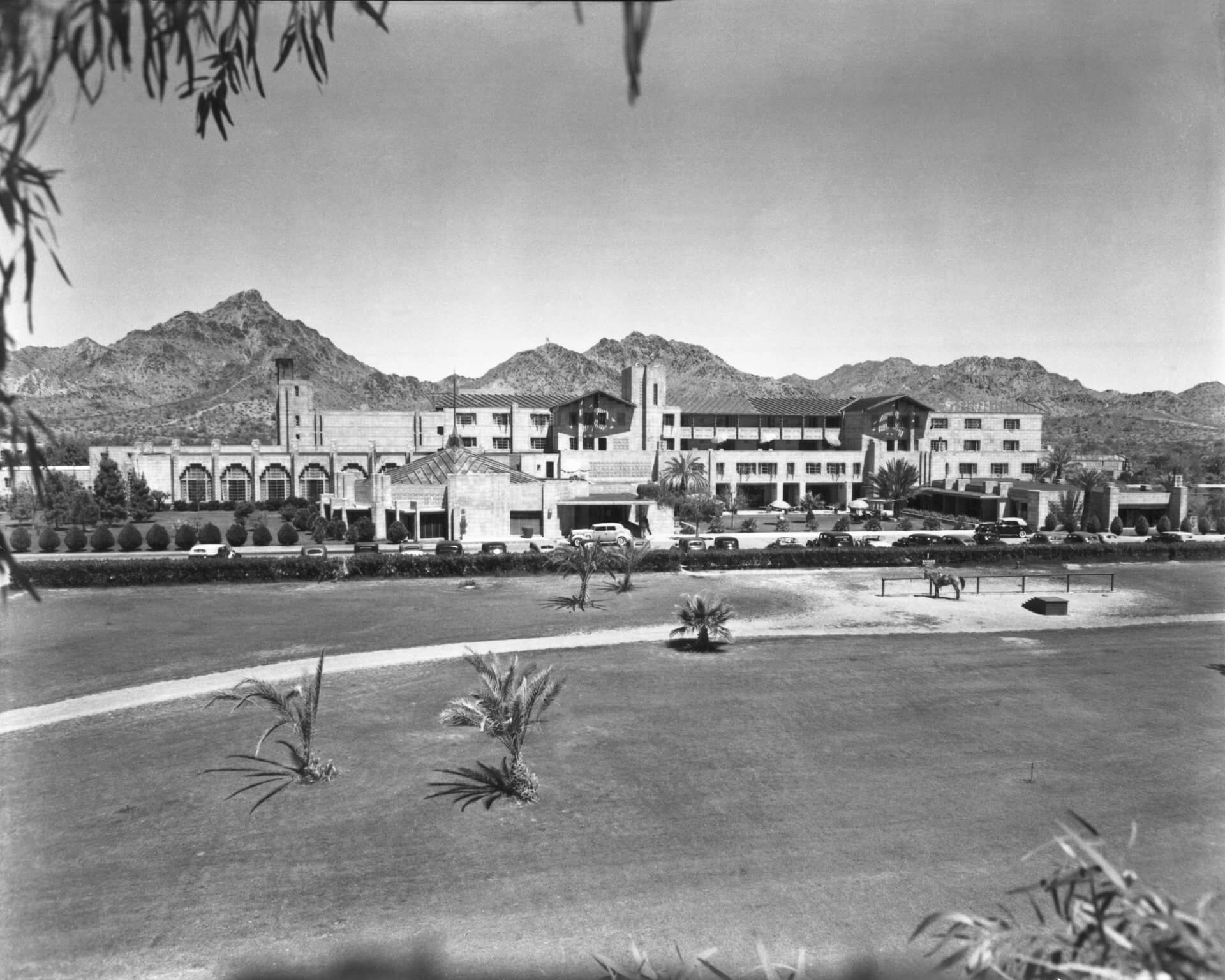 In 1910, Warren and Charles McArthur move to Phoenix from Chicago. They outfit Dodge trucks with extra seats calling it “The Wonderbus.” They use these to take people on tours around Arizona landmarks.

By 1924, the brothers want to make Arizona a tourist destination – but they need a hotel.Albert Chase McArthur – Warren and Charles’ brother – designs the Arizona Biltmore with a strong Frank Lloyd Wright influence.

FUN FACT
McArthur paid Frank Lloyd Wright $10,000 to use his patented block design, but it turned out Wright didn’tactually own the patent. This permanently soured their relationship.

In August, 1928, construction begins on the Arizona Biltmore.

FUN FACT
On opening day, the Biltmore had over 250,000 blocks, 33,000 pounds of copper in the roof and the second largest gold leaf ceiling in the world (behind the Taj Mahal)!

In 1929, the stock market crashes and the Biltmore is sold to William Wrigley Jr., an original investor from Chicago.

1940’s – 1960’s
The Arizona Biltmore thrives as a socialite’s escape hosting presidents, dignitaries and the dazzling elite of every generation. We continue to hold ourselves in this elevated place of cool glamour; of Marilyn by the pool and Frank Sinatra at the bar, but now there’s a fresh edge to it - an effortless chic.
1970’s

The Wrigley’s own the resort until it is sold to the Talley’s in 1973.

In 1973 after the sale, a devastating six-alarm fire rips through the resort during renovations, calling 35 firetrucks and 150 firefighters.

The Talley’s promise to reopen for the holiday season, hiring all students from Taliesin West and a construction crew. Crews worked 24 hours a day for 81 days and saved the season.

In celebration of the 1973 grand reopening, Frank Lloyd Wright’s widow donated “Saguaro Forms and Cactus Flowers” as a stained-glass gift. It still hangs in the lobby today.

FUN FACT
FLW originally created the colored pencil drawing for a series of covers for Liberty Magazine in 1927. The magazine
said it was too radical for the times and never published it. Mrs. Wright found the drawing and commissioned an
artist from Mesa to put it into stained glass. It remains the centerpiece in the front entrance.

In 1975, the Paradise Wing is completed.

In 1979, the Valley Wing and Conference Center is completed

1980’s
In the 1980’s, Terrace Court Wing, East Wing, Garden Wing are completed. The cottages and lobby are renovated, but the original architecture is preserved.
1990’s

In 1998, the spa, beauty salon and fitness center are added to the property.

1999 begins a four-year, $50 million refurbishment with additions of the Villas, Arizona Wing and Olympic sized pool.

*Limited availability over select dates. Rate does not include taxes, gratuities or incidental charges.

Your room will
always be waiting...

Your room will
always be waiting...